Deep11 Posts: 221 Solid Baller
December 2016 in Technique & Theory
i thought given the recent threads - "tipping in the turn" and 'binding rotation" that my winter "project" may be of interest:

So having had a mixed season trying a number of different skies it is clear that the greatest hindrance to progression is me not the ski (sadly).

There are plenty of problems with my skiing, but my most common "fail" is my onside (2,4) turn. The number of times I've wasted perfectly good passes at 2,4 is really frustrating and the boat driver joking about it just confirms things (you know who you are "taxi at 2 ball").
So this off-season I will be mostly working on rebuilding my onside / heal side / 2,4 turn.

I had a think about the best way of achieving this and decided that removing as many variables as possible is important so that I can get as many "controlled" approaches into 2,4 as possible.

This sport doesn't really allow isolation of key areas (which I guess is what makes it so hard to learn / and fun) so to limit things I decided to drop the speed to 32mph and sit at 14m (28off). I don't think that with any longer line lengths the swing of the boat is really there and also at longer lengths the temptation is to get much wider than the bouy line before coming back in, which again is not really the type of turn I want to work on.
Anyway 32/14 seems to be a pretty good compromise as I can quite easily make all the passes (if I do end up in the water guess what - it's at 2,4 - but as I'm working on that its to be expected.).

With all sports/dynamic moves I like to try and build a progression, but how to do it for a slalom turn?
I decided on:
1. Simple passes trying to really feel my position on the ski - forward / back - the place where this is achievable (and most relevant) is in the approach to the turn. This involved a couple of sets where I was really concentrating on feeling my weight on the balls of my feet. I moved the boots around a bit and settled in separating as far as the radar sequence plate would allow - about an inch - which made feeling my position easier (compensated with a forward movement of the front binding).
2. Having established the forward / backward "feel" I then spent a couple of sets working in the left/ right feel - this was interesting as I found that without my middle (knees to hips) being "tight" it was relatively easy to think I was balanced on top of the ski in the turn but actually falling to the inside more than the speed or centrifugal force would allow = either just fall off the side of the ski or hips drag at end of turn / ski snags and another swim. Eventually managed to "feel" that bringing the inside (right for me) hip forward in the approach allowed a general tightening of knees to hips in conjunction with maintenance of the forward / back balance point. This allowed for a controlled stable turn. (Don't think this is counter rotation as I'm not too focused on the upper body.)

3. The next step after a number of easy sets with balanced carved turns was to work out how to influence the radius of the turn. (My preferred technique is high on the boat and early for the bouys, dropping in to each turn. Not a series of linked turns, so the tighter a radius I can make the better).
Ice stopped play as our lake froze over for week or so - melted last week and great conditions so got out yesterday.
air = damn cold, water = colder (approx 41 and 37 F i think)

The video below is my next progression to work on the radius of the turn.

Here I am consciously trying to push the ski out at the apex of the turn whilst staying as upright and on top of it as possible (level head shoulders etc). I am driving through the front leg and really try to feel my inside hip staying up. To reduce the radius of the turn I am trying to force my left hip back with the pressure of this pushing down my right leg. In effect the result is trying to sit on the bouy but with my left cheek. Where it goes wrong is when my right hip starts to drop back on the end of the turn - it's as though my subconscious is trying to finish the turn that little bit more quickly by rotating in. What happens is overturn of the ski / break at the wait / slack / hit etc. etc it's really good to feel this, in effectively slow motion, and to know what is happening as this is what has been bugging me all season. On the video it is really hard to see that I am pushing that right hip forward - I guess that shows room for improvement but importantly I am finishing the turn with my body facing down course (open) and without breaking at the waist., which for me is a big improvement esp. If it becomes predictable.

Anyway whilst looking at this video there are clearly many things to work on, the only one I'm going to keep working on for now (and it's hard not to bring other factors in) is the 2,4 in the hope that I can develop a little muscle memory to take up the line.

Thats it so far, as along as the ice holds off ill keep at it as long as can.
I am more then welcome for any advice / criticism to help me get a predictable onside turn. 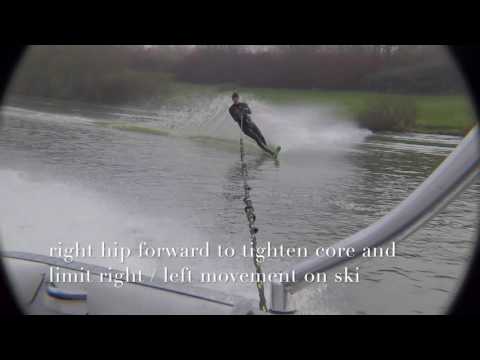