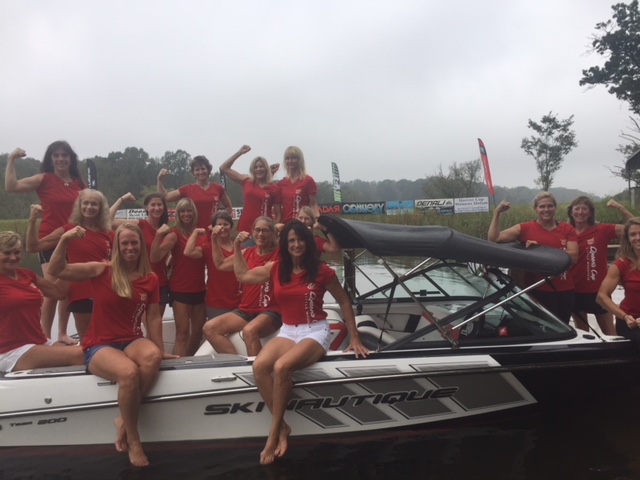 Mills, skiing on her home lake, ran 4½ at 38 off, topping Covington’s 3 at 38 in the final, and claimed the $2,000 first-place check. The Queens Cup, also sponsored by Race City Marine and the Women’s Sports Foundation, was originally scheduled for Sept. 15-16 but was postponed because of Hurricane Florence.

Mills was the No. 1 seed throughout the two rounds of Saturday qualifying and Sunday’s Sweet 16. Covington, of Texas, was seeded third throughout and defeated No 2 seed Joy Kelley of Tennessee in the final four, running 1¼ at 38 off to Kelley’s 1 at 38.

Mills and Covington are Masters Women skiers, and Kelley skis in the Women 6 age group.

Kelley, 60, represented the mature skiers in the field and held her spot as No. 2 seed through the two qualifying rounds and into the final four. She has been a podium finisher in all three years of the Queens Cup, and also got the skiers fired up with a motivational speech at the Saturday night banquet.

“It would be impossible to duplicate how special a weekend we all had,” Kelley posted on Facebook on Sunday evening. “There is no other event like it … lives greatly impacted and inspired on and off the water! Really happy to get third with so many strong and tough women!”

Strong and tough were keywords in her speech Saturday night as she encouraged everyone present to be emotionally, mentally and physically strong.

“Put blinders on. Find a way that works for you and make it happen,” Kelley said.

The Queens Cup is for women ages 30 and older, and uses a format that allows all ages to compete on equal footing. The event included five Women 7 skiers (ages 65-69), and four of them made the Sweet 16.

Rounding out the money winners and podium finishers were Trish Burt of Florida in fourth place and Erin Peckham of New York in fifth. The rest of the elite eight were Jennifer Wood of South Carolina in sixth place, legendary Leza Harrison, a Women 7 skier from Florida in seventh, and Marla Lott of Indiana in eighth place.