Introducing the GOODE MK1, the most advanced trick ski ever built 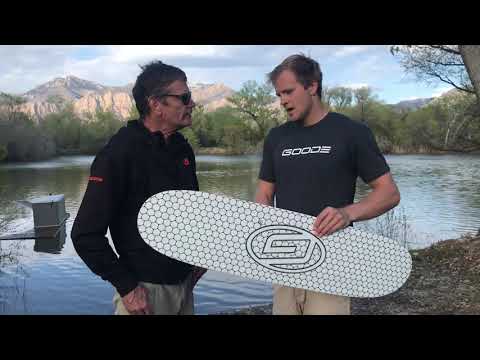 Introducing the GOODE MK1, the most advanced trick ski ever built

GOODE Skis is proud to announce a new addition to its lineup and a step forward for trick skiing with the release of the MK1, the most technically advanced trick ski ever built.

"I'm in total awe with how technically difficult and amazing to watch trick skiing is," says Dave Goode, president and founder of GOODE Skis. "Much like the slalom market in the early 90s though, I see a lot of room for progress in the design and construction of trick skis so I'm very excited to see our construction technology take tricking to a higher level."

The MK1’s design and construction process was heavily influenced by world Mens Tricks No. 1 Martin Kolman, who won the Moomba Masters title earlier this spring on the ski.

“For me the MK1 provides a level of confidence that the ski won’t change over time, it won’t break down and I won’t ever have to worry about breaking it the day before a tournament again,” says Martin. “I’ve skied the same ski all year, got a big win on it at Moomba, and it feels the same as when I first got on it back in February.”

The defining characteristic of the MK1 is its first ever pure carbon core in a trick ski. Other brands use only foam or aluminum honeycomb cores. Carbon has over a 6X strength to weight ratio when compared to aluminum. This innovative construction technique has created a ski that is lighter, more responsive and more durable than current trick skis.

“Skiers will definitely notice more ‘pop’ off the wake with the MK1, and then be surprised by the nice soft landing it gives,” says Martin. “And anyone who does a lot of flips knows how brittle trick skis can be. That’s not going to be an issue with this ski.”

Unlike other trick skis, the MK1’s bottom grooves do not extend the length of the ski, but instead are only on the ski tips. This “SpinZone” creates a flatter mid-ski section that leads to easier, faster spins and more energy off the wake.

The step-down edge is a quarter-inch pre-edge that runs all the way around the MK1, creating a sort of double edge that allows the skier to build a progressive edge into the wake.

“Let’s take a flip for example, you don’t want a full edge right away,” says Martin. “With the MK1 it’s easy to start an edge but it doesn’t just dump you over into a lean lock. It’s a more progressive edge that is controllable and precise.”

While most high-end trickers use a hard-edge ski for hand passes and a soft-edge ski for toes, Martin says the MK1’s unique design features have eliminated the need to have two different skis.

“I used to use a soft-edge ski for toes because soft edges provide a little more stability. But with the step-down around the edge of the ski we’ve been able to combine the best characteristics of both a hard and soft-edge into one hard-edge ski. I now use the same ski for toes and hands.”

While the MK1 shows GOODE is going all in on trick skiing, it isn’t the first time the company has built a trick ski. Regina Jaquess won the 2003 Womens World Overall title on a GOODE trick ski that happened to be the first trick ski ever built by GOODE.

“Since we first had a trick ski in the early 2000s we’ve learned a lot about new ski construction and design techniques, but trick skis really haven’t progressed since then,” says Dave, who himself began competing in tricks competitions in recent years. “We’ve put that knowledge to good use in our slalom skis and now we want to use that expertise to help make tricking easier and more enjoyable.”

The 44-inch MK1 is available now with 1-3 days shipping, while pre-orders are currently being accepted on the 42- and 54-inch models, with expected shipping of 4-6 weeks.