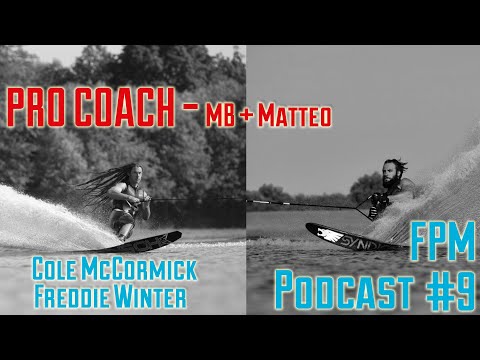 Something new on FPM, this is part 2 of a new series where MB and Matteo breakdown the technique and movements of some of the best skiers in the world. Here we take a look at two of the best Men's skiers, Freddie Winter & Cole McCormick. This episode was originally filmed as a joint FPM + TWSP episode, but due to the visual nature of the video analysis, we decided to release it here only. Big thanks to Matteo for sitting down with MB, as well as The Water Ski Broadcasting Company for the killer coverage all year. ALSO, sorry about the audio quality on MB's voice...the main microphone died part way into the discussion, so the backup microphone is all we were able to capture....

What he does good:

What could he do better:

Freddie Winter
**A Beast on the Ski

What he does good:
- always finds athletic stance into the wakes, no matter what happens in the turn
- really good at stabbing through back foot to kill speed at finish of turn and get back into athletic stance/acceleration phase into wakes

What could he do better:
- stronger with legs through transition


Bonus Content:
- You should NEVER have your feet between you and the boat on the downswing (acceleration phase)...that is a self-defeating idea and a hugely misunderstood part of waterskiing.

Thanks for watching, and SUBSCRIBE if you liked what you saw!

Check out what Matteo has been doing over at the Water Ski Podcast: https://www.thewaterskipodcast.com/