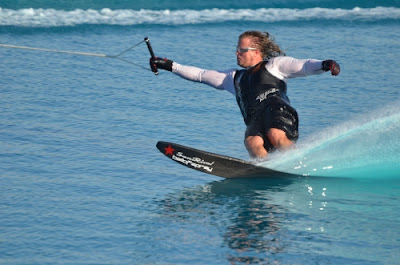 My first introduction to SansRival was last winter over beers in a hotel bar in Vienna, Austria with the company owner, Alex Munninger.  This charismatic Austrian businessman was explaining to me how he loved water skiing, and how he was building a ski in Germany that was, literally, without rival.  At that point, I had never seen one of these German made Austrian skis nor had I met anyone who had skied on one. I had no idea who the design team was or if this company was for real.

Now fast forward to late July of this year. FedEx delivered a ski box that contained what is the most cosmetically beautiful ski I had ever seen.  A flawless carbon fiber weave bottom has been done before, but the top of the SR2 takes it one step further with a deep blue glaze over the carbon that needs to be seen to be understood. The crisp red and white logo in the top coat is simple and elegant. From tip to tail, the SR2 shows the manufactures attention to detail.

When the time came to mount bindings on the test ski, I found the inserts to be unusually far back on the ski. After a month with the ski, this is the only design flaw that I have found. I presume this has been remedied by the factory for future skis, and to be fair, this ski may be a demo because of this issue.  I was able to get my bindings where they needed to be mounted; thus, this did not present a problem for me. (Update: The factory has confirmed that there was an issue with the binding inserts position. This has been fixed. )

The SR2 encourages the skier to take a deep breath and to ski a little easier than most skis. It gets plenty of angle, gets unquestionably wide, and performs with minimal drama.  It is odd to think of a short line slalom ski as being particularly undemanding, yet the SR2 is that exactly.  Every ski on earth works better when the skier is more technical, and certain skis will punish a skier less for their mistakes.  The SR2 is not only forgiving; it is tolerant as well.

This ski’s basic stability makes the skier feel comfortable driving forward into the apex of the turn. As with all skis, more front foot pressure leads to shaper turns, but the SR2 is less demanding than most skis in this regard. The resulting turns are generally a smooth arc that ends inside the ball line. The tail of the ski never feels lose allowing turns that are comfortable and dependable - never radical.

Unlike many of the current top skis, the SR2 allows the skier to stay back approaching the on side turn. This is clearly not the recommended technique, but it is refreshing to ride a ski that is easy going.  With correct technique and front foot pressure, the resulting turns are smooth arcs similar to the Off Side. Turns with heavy back foot pressure are not as smooth, but it is nice be able to rotate off the back foot when things get ugly. 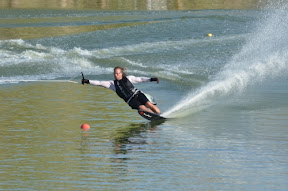 The SR2 naturally rolls out and wide of the ball without much skier input. Extra attention to handle control is not as critical as it is with many other high end skis. As stated above, it is better to ski technically correct, but the SR2 will go wide of the ball despite the skier’s skill level.


From the Ball to the wake

Skiers trying to be “light on the line” or trying to ski less aggressively will benefit from the SR2’s ease of acceleration.  Angle off the ball is practically automatic.  The physical effort needed to get across course is minimal. 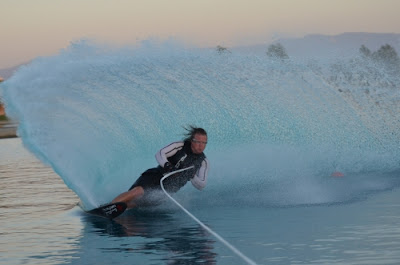 Binding settings are critical.  Because of the insert placement, I was not able to experiment with settings forward of stock, but the two sets that I took with the bindings back 3/16 of an inch, half the distance of a normal binding move, resulted in a radical change in performance.

In addition, the fin setting is more critical than I expected. I am unconvinced that the settings I am using are optimal, but the few experiments I tried lead me to believe that there is a very narrow tolerance for settings.

The fact the fin and binding setting are super critical, but the ski is tolerant to a plethora of skier mistakes seems counter intuitive, yet that is what I experienced.

The ski is somewhat squirrelly outside the slalom course, especially without a wing. It could be tricky for a two handed gate. Once inside the course and off a flat ski, stability is not an issue. I suspect that moving the bindings slightly forward may solve this issue. Moving the binding back only 3/16 of an inch made the ski very roll unstable.

At my weight of 192 pounds, I find that the 68” SR2 feels bigger that other skis of the same length. I ran some passes at 36 mph with a wing, and the ski felt oversized. I am comfortable on the 68”, but I suspect that a 67” version may be a better fit for me. Skiers who are between sizes may want to try the smaller size first.

The SR2 defines a new category: The Luxury Slalom Ski. It is beautiful, it is exotic, and when you ski on it, you feel like a million dollars.  This relatively new ski company has built a ski that I am genuinely impressed with. The SR2 deserves the name Sans Rival!

Final note: This is the fifth ski that I have 20 or more rides on this year. If I had to pull one ski off the rack for a tournament with minimum practice, the SR2 would be the clear choice.