My trip to the Goode Factory to see the NANO ONE

Last weekend, I traveled to the Goode factory in Ogden, Utah to find out what all the fuss was about with this new ski called the NANO ONE.  Dave Goode gave me a tour of the factory, and then he took me to his lake for a test ride on the new ski. I want to thank you to Dave and Dawn Goode for their hospitality.

Below is what I learned about the ski.

At Goode skis, Dave Goode oversees every detail. Every product has his name on it and Dave takes that seriously. Idealistic performance goals drive every decision. Compromise is not something that Dave is known for. The result of his stubborn idealism is a product line that has been ridden to more titles and records than any other ski company in recent history. Lurking across town from the Goode factory is professional skier Nick Parsons. Nick is perhaps the Yin to Dave Goode’s Yan. While Dave is keeping the company on track, Nick is wondering if he could mount a rocket booster to his bindings. One would assume that Nick identifies with Wiley Coyote.  When Dave is not looking, Nick is apt to grind, file or hacksaw prototype skis. Nick’s aggressive tinkering balanced against Dave’s calm has resulted in some ground breaking skis. The Goode Wide Ride started as a project to address Nick’s skiing style. The Goode Mid Ride evolved from the Wide Ride and has been one of the most successful skis on the market in the last few years. 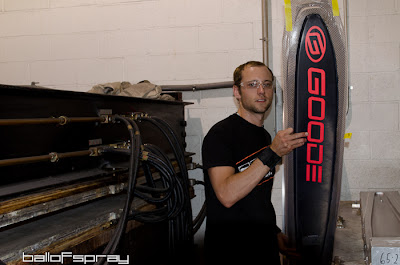 Conventional wisdom today says that skis need to get longer and wider for heavier or taller skiers; narrower and shorter for lighter or shorter skiers. Following this logic Nick who is 6’4 and 205 pounds needs a pretty big ski. Normally, a ski for Nick is going to have a larger turning radius than a shorter ski. Wanting a ski with a smaller turning radius for a bigger skier lead the team at Goode into a new way of thinking about ski design. Most skiers will ride the 65” NANO ONE. There is a larger version for the “big boys” but generally speaking this ski is “one size fits all”. The NANO ONE is not as wide as a Goode Mid Ride, but it is a little wider than the Goode traditional shaped ski. The extra width of the NANO ONE allows this shorter ski to stay up on the water.

The other trick to giving a short ski to a big man is keeping the ski from sinking and overturning at the ball line. The NANO ONE has relatively little inward taper from the bindings forward which causes the ski to ride at an almost constant attitude as the skier’s weight moves forward or backward.  Turn radii are consistently sharp and nearly automatic. 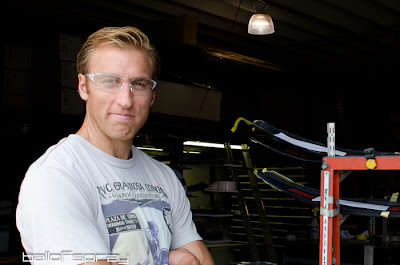 The NANO ONE was roughed out by Nick and fine-tuned by Dave. Accepted ski design parameters say that a ski designed around a 6’4” man, who runs deep  41 off, is not going to work for the average skier. This is where we come to the “eureka!” moment:  on the NANO ONE, the distance from the bindings to the tail is about the same distance as a traditional ski designed for a 120 lb. woman. This allows for tight radius turns. In addition, the broad straight fore body is remarkably insensitive to skier weight.  The result is that a skier’s weight is far less critical on the NANO ONE compared to any ski before it, and it provides small ski turns to skiers of all sizes. This combination of unlikely paired design elements has produced a ground breaking short line slalom ski.

The early reviews and buzz around this ski are staggering. A full BallOfSpray review will take a number of weeks, but I will say that I matched my personal best the first time I rode the NANO ONE.